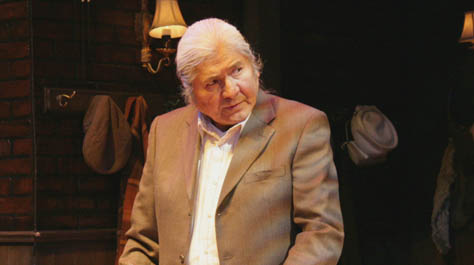 Running Time: 100 minutes (not including intermission)

Gordon Winter is an RCMP hero, a lifelong champion of First Nations’ rights, a residential school survivor, and a bigot. In this controversial new play loosely inspired by the life of David Ahenakew (former National Chief of the Assembly of First Nations whose anti-semitic statements lit a political firestorm across Canada in 2002), playwright Kenneth T. Williams (Thunderstick) draws a thoughtful and sometimes shocking portrait of a man who has spent a lifetime fighting oppression, yet paradoxically and unapologetically clings to his own strident prejudices.

Canadian screen legend Gordon Tootoosis (Legends of the Fall, North of 60) embodies Winter and his complex personality with a magnetic intensity that has earned him the praise of critics and audiences. This production is also a rare opportunity to see this iconic actor perform live “I know that Gordon has had many scripts submitted to him over the years that he has been absent from the stage.  We are both proud and honoured that Gordon Winter is the play he chose to mark his return to the theatre.” Del Surjik, Artistic Director, Persephone Theatre.

A timely and provocative play about hate, free speech, and the disturbing inconsistencies of human nature, Gordon Winter is powerful theatre that asks us to revisit our own comfort zones and intolerances.

PLEASE NOTE that this production contains mature language and themes, and may be offensive to some audiences.

When I read it I was hooked. Here’s a story I want to do. It's a Saskatchewan story, it's a Saskatoon story. It's ours.