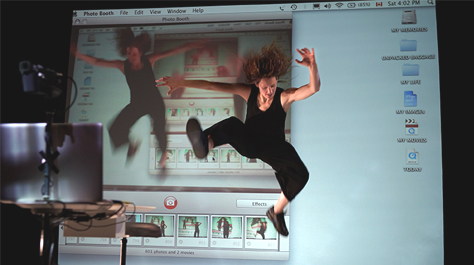 AVATAR is inspired by the mantra, “I post, therefore I am,” referencing the way Internet users legitimize their existence by documenting their lives and uploading the data to personal webpages and blogs. In a striking audio/video/dance performance, Freya Björg Olafson moves intimately through software, opening files on her personal computer and interacting with a built-in camera to explore methods of creating, validating, and disseminating one’s identity through the use of technology and the Internet. The performance inherently becomes a technological duet as the artist makes use of live video feeds and projections to magnify, manipulate, and effectively broadcast persona and image.

Freya Björg Olafson is an award-winning interdisciplinary artist based in Winnipeg, whose work has been presented to critical acclaim nationally and internationally.

Olafson...transforms from a lonely Friday-night vlogger to a ghoulish, empty eye-socketed figure that’s a cross between a Marilyn Monroe impersonator and a drag queen from hell.  [She] crafts a theatrical persona that’s as riveting as a train wreck.

The AVATAR series began at Studio 303 (Montreal) during a workshop lead by 2boys.tv (video/performance duo, Montreal) in March 2008. Since then the series benefited from significant time at PAF~Performing Arts Forum (St.Erme-Outre-et-Ramecourt, France), SIM – The Association of Icelandic Visual Artists (Reykjavik, Iceland) and at La B.A.R.N with Tedd Robinson of 10 Gates Dancing Inc (Ontario).

The development of AVATAR was generously supported by The Canada Council for The Arts, The Manitoba Arts Council, The Winnipeg Arts Council and Video Pool Media Arts Center.