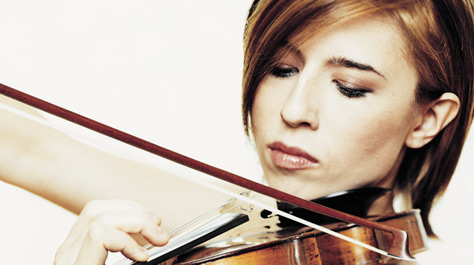 In this much anticipated recital, Ottawa audiences will have a chance to discover the “engaging sensitivity and gorgeously full tone,”(The Strad), for which Erika Raum has become celebrated both at home in Canada and internationally.

Since 1992 when she took first prize, as well as the prize for best interpretation of a Mozart concerto, at the Josef Szigeti International Violin Competition in Budapest, Erika has quickly come to be considered in the first rank of Canadian violinists – a peer group to be proud of. The extraordinary virtuoso has developed a devoted following for her warm yet unforced sound, and the vibrant, colourful tenor of her performances.   In addition, Ms. Raum is celebrated for an engaging and generous stage presence.

The daughter of composer Elizabeth Raum and trombonist Richard Raum, the young prodigy made her first serious foray into a musical life when she began to study the violin at the age of three. At the tender age of ten, she made her concert debut performing Haydn with the University of Regina Chamber Orchestra. Two years later, she made her professional debut performing with the Regina Symphony Orchestra, and she hasn’t looked back since.

Nowadays the energetic Raum tours extensively, performing in recital with partners who have included pianist Anton Kuerti, Andrew Burashko, Jon Kimura Parker, and Francine Kay to name a few.  She has appeared with numerous European orchestras including the Franz Liszt Chamber Orchestra, the Vienna Symphony Orchestra, and the Hungarian National Philharmonic, and with orchestras here at home in Toronto, Calgary, Vancouver, Ottawa, Victoria, and Halifax.  If that weren’t enough, Ms. Raum is also a member of the ARC Ensemble (Artists of the Royal Conservatory), a chamber group specializing in the rediscovery of great 20th century composers and their music, with an emphasis on those whose lives were interrupted or even lost during the Holocaust.  The group has recorded two Grammy-nominated cds.